Please take a moment to read the following article (courtesy of the New York Times,)  about how one company is rethinking the thermostat:

A Thermostat That’s Clever, Not Clunky

Steve Jobs may have transformed a bunch of industries, but his great skill wasn’t really inventing. Instead, he was the world’s greatest makeover wizard. He’d look at some industry, identify what had been wrong with it for years, and then figure out how to make it beautiful and simple and joyous.

Nest Learning Thermostats, above, with color-coded high and low temperatures.

The latest in technology from the Times’s David Pogue, with a new look. 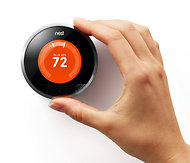 The Nest indicates the time needed to reach 72 degrees. The thermostat was designed by teams that worked on Apple’s iPod.

Now that Steve’s gone, who will look around for worlds that need changing?

Well, how about Tony Fadell? He seems to have the pedigree. He helped design the iPod. He ran the iPod and iPhone divisions of Apple for years.

He’s got that spot-what’s-wrong-with-it gene.

With his new company, Nest, he has decided to reinvent a tech item that hasn’t seen much innovation in decades: the thermostat.

Don’t snicker. This isn’t trivial. According to Nest, there are a quarter of a billion thermostats in this country alone; 10 million more are bought each year.

Half of your home’s energy is controlled by this ugly, beige tool. Most people never even bother to program their programmable thermostats. As a result, their houses actually use more energy than homes without them. Two years ago, the federal government eliminated the entire programmable thermostat category from its Energy Star program.

The Nest Learning Thermostat ($250) doesn’t introduce just one radical rethinking of the thermostat; it introduces four of them.

RADICAL CHANGE 1 The look. The Nest is gorgeous. It’s round. Its screen is slightly domed glass; its barrel has a mirror finish that reflects your wall. Its color screen glows orange when it’s heating, blue when it’s cooling; it turns on when you approach it, and discreetly goes dark when nobody’s nearby.

Sweating over attractiveness makes sense; after all, this is an object you mount on your wall at eye level. A thermostat should be one of the most beautiful items on your wall, not the ugliest.

RADICAL CHANGE 2 The Nest has Wi-Fi, so it’s online. It can download software updates. You can program it on a Web site.

You can also use a free iPhone or Android app, from anywhere you happen to be, to see the current temperature and change it — to warm up the house before you arrive, for example. (At this moment, vacation-home owners all over the world are wiping drool off their keyboards.)

RADICAL CHANGE 3 Learning. The Nest is supposed to program itself — and save you energy in the process. When you first install the Nest, you turn its ring to change the temperature as you would a normal thermostat — at bedtime, when you leave for work, and so on. A big, beautiful readout shows you the new setting and lets you know how long it will take your house to reach that temperature. That information, Nest says, is intended to discourage people from setting their thermostats to 90 degrees, for example, thinking that the temperature will rise to 70 faster. (It doesn’t.)

Over the course of a week or so, the thermostat learns from your manual adjustments. It notes when that happened, and what the temperature and humidity were, and so on. And it begins to set its own schedule based on your living patterns.

Energy savings. Let’s face it, $250 is a lot to pay for a thermostat. But Nest says that you’ll recoup that through energy savings in less than two years.

The mere act of having a correctly programmed thermostat is the big one, of course. Why should you waste money heating or cooling the downstairs when you’re in bed upstairs? Or when you’re away at work all day?

But the Nest’s smartphone-based components offer other goodies, like Auto Away. The Nest contains two proximity sensors (near and far), which detect whether anybody is actually in a room. If the sensors decide that nobody’s home, they let the temperature drop or rise to an outer limit you’ve defined — say, 65 in winter, 80 in summer — even if that absence isn’t part of your normal schedule.

This feature is useless, of course, if your thermostat can’t see the room — say, if it’s in a closet or behind an open door. But often I’ll return from a day trip, having forgotten to turn down the heat, and see Auto Away on the screen. Good ol’ Nest!

Nest says that turning down your thermostat by even a single degree can save you 5 percent in energy. To that end, it offers a little motivational logo: a green leaf. It glows brighter as you turn the ring beyond your standard comfort zone. As a positive-reinforcement technique, it’s a lot more effective than an exhortation from Jimmy Carter to put on a sweater.

This all sounds spectacular, of course, and mostly, it is. But feathering my Nest wasn’t all smooth sailing.

First, of course, you have to install the thing. Nest goes to extraordinary lengths to help you out. The elegant package includes a screwdriver and the Nest itself has a built-in bubble level. YouTube how-to videos and tech support are available.

But in the end, replacing a thermostat is not a job for a novice. It involves cutting power to your existing thermostats (after figuring out which circuit breaker is responsible); removing your old thermostat (revealing an ugly, gaping maw in your wall); hooking up about four colored wires (nasty-looking and very short); covering up the gaping maw with the included rectangular base plate (necessary only if the maw is larger than the Nest, which is likely); and snapping the Nest into place.

Nest’s installer performed the surgery on my downstairs thermostat as I watched; I did the deed myself on the upstairs one. It took about half an hour to install each thermostat. If you don’t feel up to the task, Best Buy will send somebody to do it for you at $120 (plus $25 more for each additional Nest).

Second, my test Nests were cuckoo for the first couple of weeks. They’d decide for themselves to blast the heat to 73 degrees — at 4 a.m.

That was a little alarming. You know those sci-fi movies where our machines turn on their human overlords? Yeah, like that.

The company chalked my problems up to first-release bugs, and had me reset my thermostats. (The software is very iPod-like. You turn the barrel to choose from the colorful on-screen menus, and you click inward to make a selection.) After two such resets, the Nests are now working perfectly and saving me money.

The software has room to improve. For some reason, the Nest’s own screen shows you a lot more about what’s going on with your thermostat than the Web site or the phone apps. For example, the Web and the app don’t show you when Auto Away kicked in or when you manually adjusted your thermostats. (The company says it will remedy that situation soon.)

The Web site is beautiful, but programming your Nests using its Schedule tab is clumsy and tedious. It takes too many unnecessary clicks to introduce a change in the schedule.

I found some bugs, too. For example, if you have multiple Nests, just coming back home doesn’t disengage the Auto Away mode automatically; you have to click each thermostat’s screen within two minutes. (Bizarre.)

Goodness knows there are cheaper thermostats. And there are other learning thermostats with color screens and Internet connections. But they don’t have the sensors that let them self-adjust. They don’t look like pieces of art. They’re sold and packaged for contractors, not humans.

And they actually cost more: for example, similar models of the Honeywell Prestige and Ecobee Smart Thermostat go for more than $300 on Amazon.com. (Can you imagine what the arrival of the Nest and its team of former Apple superstars must be doing to morale at those companies? The Friday beer blasts must be a bummer these days.)

The Nest is gorgeous, elegant and very, very smart. It will keep your house at the right temperature, save you money and do some good for the planet. Put another way, it can make you comfortable in more ways than one.